Is Hugo Chavez really a dictator? 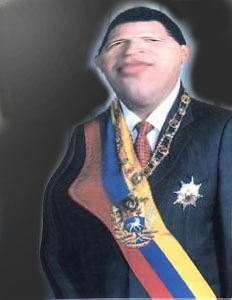 Do you think Hugo Chavez is the most controversial head of state in the world? As a dictator, he must be mean and pitiless, right?

But what is dictator in eye of art? It can be more sadistic than sadist itself. It can turn the definition into abstract and Hugo Chavez maybe considered a hero to meet the requirement of a national fighter. The one to fight for what he believes, so art is removed from this context. Let him talk about himself and others talk about him. He is part of all leaders everywhere in the world, making promises in order to get elected, few ever do what they promised, and many don't even make the attempt, if you may think so.

As for me I won't elaborate the meaning of democracy here to interfere other business. Hugo Chavez as a dictator is the same as an honorable Mr. So and So whose images appear everywhere in the city's billboards and banners. Be it corrupter or opportunist, people don't care.

Hugo Chavez was born to the son of working class parents who wish him to be dictator. How about this sentence? You may blame me for making up this entry. But Chavez true story is something that can be changed when it comes to political interests. Dictatorship in Indonesia, my country, for example, used to be wrapped in smiles and convincing development breakthroughs in the era of Sukarno and Suharto.

So we need to rewrite the story of dictatorship into something more worth-reading like the story of elites with their personal benefit. Not interesting? Okay, how about Chavez getting rid of his presidential limo and donated his princely presidential salary to benefit the poor? Wanna join Chavez driving a jeep and ask him, "are you really dictator, sir?" Would you like also to accompany him riding on the back of trucks with the people, or mingling with people on the street. If you say, what a strange behavior for a dictator! What a weird president!, you have come the world of sadistic. The world of perception! What is it?

You may find Hugo Chavez  in the shadow of hero or villain. He can be the one to combat dictatorship himself. He is the one often referred to in the U.S. as one of the most dangerous politicians in Latin America. As the President of Venezuela, he regularly acts against the Washington Consensus by implementing alternative models of economic development and social changes in the name of democratic socialism.

The way Chavez combat dictatorship is by getting himself into abstract, singing like that one people usually watch on Bollywood flicks.Make a convincing dance, gather with flocks and yell at the echoing rocks.When battles call for him, he will be ready with patriotism blessed by mothers all over the world.

Chavez is an inspiration!

Welcome to the world of fancy initiated by Mr Nurman who learns to be a dictator to tickle your funny bone.
By man2sting at October 12, 2012 No comments: