Why Yoko Ono Likes Me

I am grateful Yoko Ono likes me. She cannot live without me. She's been with me the rest of her life. Ono grew up in Tokyo, and studied at Gakushuin, I know it. She withdrew from her course after two years and rejoined her family in New York in 1953. She spent some time at Sarah Lawrence College, and then became involved in New York City's downtown artists scene, including the Fluxus group.

I also know she first met Lennon in 1966 at her own art exhibition in London, and they became a couple in 1968. Ono and Lennon famously used their honeymoon as a stage for public protests against the Vietnam War with their Bed-Ins for Peace in Amsterdam and Montreal in 1969.

But there's no story about Yoko Ono liked doing mountain climbing in Indonesia, India or Pakistan. Do you like mountain climbing, anyway? Mountain climbing doesn’t require power-lifting skills, but it does require a fair bit of strength. After all, you’re not just hauling your body up the mountain, you’re also probably hauling a large pack on your back and your body needs to be able to move vertically with that extra weight.

But we're not talking about mountain climbing here, we're talking about my relationship with Yoko Ono. As Lennon's widow, Ono works to preserve his legacy. She funded Strawberry Fields in New York City, the Imagine Peace Tower in Iceland, and the John Lennon Museum in Saitama, Japan (which closed in 2010). She has made significant philanthropic contributions to the arts, peace, Philippine and Japan disaster relief, and other causes. Ono continues her social activism, inaugurating a biennial $50,000 Lennon Ono Grant for Peace in 2002 and co-founding the group Artists Against Fracking in 2012.

As the one to serve not only yoko Ono, I have so many uncountable fans all around the world. Once she said, "John loved chocolate. I didn’t. But after his passing, I went for chocolate, and I liked it. Now, I’m trying not to eat too much of it."

Ono likes to have orange juice with grated ginger and garlic mixed when she comes home from a long trip abroad, But she cares about me much than that.

Okay, now I just cannot hide myself from you all guys if you're so curious about me. First, do you know what she eats? She doesn’t crave for big fat steak, Just a little bowl of rice and kimchi will do for her lunch. Kimchi is her favorite thing.She eats mostly vegetables. She can’t stand how we are treating the animals.She eats fish off and on. But actually, She feels the best when she is just eating good, fresh vegetables.

Now, why she likes me, because I think she and most Asians agree that their stomach will cry if they don't see me in a day. Okay, ladies and gentlemen, allow me to introduce myself. Name is rice and here is my partner kimchi.

The following are 25 funny stories of celebrities for you to kill time. They consist of parody, spoof and anything rewritten from serious sources to comedies. Mostly are Hollywood movie stars, comedians, pop singers and few of them are some politicians, public figures, authors and so on.

Tickle your funny bone here. This post is for you to flash back to the time when you might miss some gossips of your favorite ones, These funny celebrity stories have the latest post written in 2010 and instead of archiving them as static files, I'd like to share them back with you here. When you are in a bad mood or get bored blogging you may visit this tickle fancy blog and have fun reading to refresh your mind.

However, in order to enjoy reading the whole separately, I compiled one by one of the selected articles into one listing, so that you just can click of these funny stories of celebrities provided below. Hopefully you can get entertained and tickled 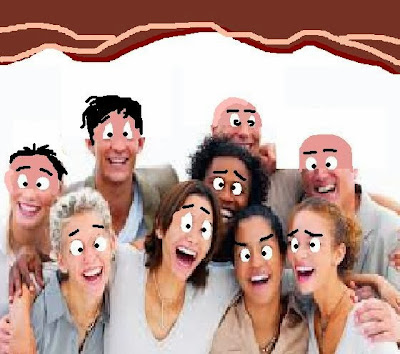 Thank you for scanning these resurrected links. I hope you enjoy all these funny celebrity stories.
By man2sting at December 13, 2013 No comments: