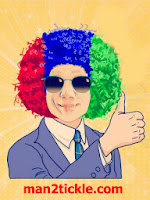 3 Robert Pattinson Spoofs To Stop You From Being Bored OnLine

Well, how to prevent yourself from being bored online? These 3 celebrities spoofs written a few years ago are updated to help you "come to your senses."

1. Robert Pattinson and His Bicycle

It is reported that British actor Robert Pattinson has just bought a bicycle worth 1000 US bucks. It is not reported that he will visit Indonesia, riding offroad onto the hillside of Mt. Merapi to visit the grave of Mbah Marijan, the guardian of the recently-erupted volcano who died in the calamity because he refused to be evacuated. No report online that you can find, either that this is the way to stop him from being bored becoming a "dark" actor for many years. Pattinson won't think it is funny to give Britney Spears or Justin Bieber a ride and then tries to keep up with the greater Jakarta commuter train on the highway. He never lets his bike be borrowed by George Michael as subtitute of car. We know once Georgle Michael forgot he was on the street.

However, in case Julia Roberts invites him to watch Eat Pray Love together, he might accept the offer. Maybe, he thinks it's okay if Oprah Winfrey borrows his bike for Sesame Street's orangutan. But one thing for sure, England will always welcome him to explore everywhere he likes. You must not be bored there and you must able to stop your boredom because it's not virtual, it's not online. It's the country where you speak your own language: English.  He might pass by Salman Rushdie on the way stop by and ask about Rushdie's memoir or may also come across the late Christopher Hitchens who's surprisingly converted to Islam (a miracle?). Riding bicycle is surely fun and inspiring.

So, when will he meet the vampires? I think a filmmaker knows better than me.

2. Robert Pattinson and His Bicycle and Kristen Steward

The couple recently shown public never told me that they used to be together starring a horrow movie. Online? No way? Maybe the title is Twilight or something. Neither did they tell me they were eager to be vampire to amuse me so that I got inspired to write about a tickling vampire. Stop it! When I wish I could get back to the time when bicycle was my means of transport to work, I hope today I can ride along the countryside with it despite my busy days--this is the best way to get rid of boredom, you must stop from being bored, man .... Pattinson and Kristen might want to join, I guess. But the news about Kristen having a ride with Robert Pattison hasn't been confirmed to me.

First we would like to know about your fansite Mr. Pattinson, what's the name? Does this belong to Edward Cullen ...?

Were you on shooting location, Friday night? But what did you do ..., oh wait, I know what you did last summer.

But, please make sure, you have done your homework, so that mommy won't yell at you. I am wondering why you should do your homework? You're a man, you can take care of yourself.

Just speak after mommy, It's too late,Mr. Pattinson, it's the time for you to go to bed but you're still in front of the computer, are you going to post another tickling story?

It is not funny if you say you are Robert Pattinson and ... YOU WHAT?!

I know you're not him. Put off your mask, Mr. so and so, I know what you did last summer.