If Britney Spears were president …

You see, President Britney Spears looked restless on a round table bench that day. Dressed in dark bikini she was biting her nail. She had just done a generous thing to her people:delivering five hundred billion three hundred twenty three pies to everybody in her neighborhood for free, but something seemed to conjure up.

“Are you really the first president since Nixon to wear eye shadow?” A man from outer space had asked her just now through an SMS. Yet she had not responded.

“Are you really eager to put a nightclub on the moon within a decade?” Another man who liked swinging through and crawling on the walls of the skyscrapers had been curious. Again she had not given any comments.

But this one surprised her, “Mrs. President, I saw you on TV showing off your buff new body.”

“Oh really?” she replied spontaneously. “What do you think? You like it?”

There was no response. An outburst of giggle was heard somewhere, instead!

A blogger was running out of the White House!

BTW, Britney Spears and Jet Li and Mr. G would like to see Ms. Marple to swallow the moon
By man2sting at August 29, 2009 No comments:

Got some crazy news to cope with stress, Mr. Blogger?

But Beware if you're not used to this weird humor, you get stressed, instead!


1. A tiring shadow was browsing on the internet and came across a funny blog. He started to laugh and … ” Would you stop that!” a voice abruptly took it back to where it belonged—the bloggers’ body!

2. A hanger jumped out of the wall to welcome a guess by the door. The stressful hanger had never been seen since and regarded as a missing thing. A lousy blogger took it with him and use it as--a hanger? 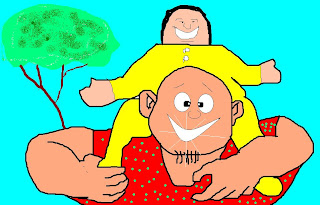 3. A spoof banner escaped from its cage and snatched a zoo visitor. The visitor was not torn apart and couldn't be eaten. He felt like being tickled to death!

4. Flash Gordon, together with Wonder Woman, went to the cinema on Friday night to see a horror movie. Unfortunately, the slide was stolen on the way to the movie theater. How come! The screen was displayed the features of stressful blogger with a hanger. It was totally not funny.

5. A turtle who’s eager to cope with stress invited Mr. Google Search Engine to his house. “Can I take some funny and tickling blogs with me?” Mr. G demanded. “Is your house is a search engine too?

6. A face whose nose is missing was laughing at itself. “Do you think it is funny?” asked another face. It didn't respond. He kept laughing. Next the face started to take off its eyes, lips and beard, and … “Stop it!” the faced returned to where it belonged, the crazily stressful blogger's!