Former British Prime Minister Tony Blair converts to Islam? This is not hot news, because up to now there's no official announcement about it. But Lauren Booth, his sister in-law has just embraced this religion. And after the conversion, a cynical remark may say, who's next? Prince Charles?

However, Charles belongs to the kingdom, the symbol of nobility of England. If he were to go pilgrimage to Mecca someday, it is a sort of tickling fate. But who knows if the late Michael Jackson might have converted to Islam and as this would also affect his fans, he was secretly murdered? No tickling fate at all!

Is Rowan Atkinson next, to be the one having a prayer rug at home? He may ask Mr. Bean about it, don't you think?

For a sensitive matter, Lauren Booth doesn't have to get "all rights preserved" to be the first to write about Tony Blair's conversion to Islam. And Tony Blair doesn't have to take an ablution before performing a daily five-time prayer--whoops, I mean his daily prayer based on his current faith. 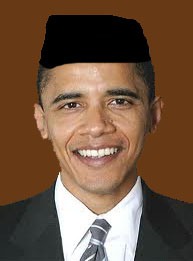 Is Obama Muslim?  Check out these 2 Funny Reasons which might tell yes, he is, or no, he isn't, or maybe. Yes, he has Hussein after his name. But wait, that's only when people misunderstand it. What is a name? What is so funny with Paula Abdul having surname abdul. She's not a Muslim. The surname Abdul doesn't have clear meaning. It needs Noun after it. If it's Abdullah, it means servant of god, and that declares a name of Muslim.

You may know this you may not: when one doesn't fast during Ramadan month, means one doesn't resemble obedient Muslims, who refrain, not only from food and drink, but also from sexual desire at this period. Is Obama Muslim? Does he fast? Maybe yes, maybe no.

Reason One: There's no report or news about him fasting or calling American people to fast together with him. But Obama might try to refrain from food and drink only until half day. Maybe that's the time when the recent communal shutdown irked him so much.

Now, just check some of these Islam-convert hoaxes: Justin Bieber? Up to now, there's no news report about him having a prayer rug at home.Paris Hilton? No veiled-over gown. Arnold Schwarzenegger? Never wishes to be a hajj. Julia Roberts? When she visited Bali, Indonesia, she had never learnt how to recite the Koran. Rick Springfield? He doesn't have sarong to perform a daily 5-time prayer. And Obama? Reason Two: Obama is never seen leading a prayer for these celebrities, but if those hoaxes never stop promoting him as a Muslim. He might challenge people to find out and he might ask himself why shouldn't I believe the hoax?

There's no compulsion in religion, so what's the fuss about? I think Robocop will never ever convert to Islam and change his name to Abdul Robocop Salam. When Barack Obama is presumed a Muslim on the internet we cannot blame Abdullah Google Search Engine Alim, thereby.

Welcome to this tickling blog. Fancy yourself here.
By man2sting at October 31, 2010 No comments: