Harrison Ford came to Jakarta once but not to stop students from fighting or promote video about animated flood. He upset the Indonesian government. Forestry Minister Zulkifli Hasan has complained about his attitude when the Hollywood actor interviewed him for a documentary being filmed in Indonesia.

Unfortunately this post is not about to dramatize that moment. "Peace is not the absence of war but the presence of justice," that's what Harrison Ford said about peace once. And now I need to borrow Mr. Ford's quote to speak before our High School students here in Jakarta, Indonesia, about "Stop being killer! sounds serious?

Sure, because the future of this country is in the hand of the young generation. While now, what we see occasionally on the streets of Jakarta students in anger fight against and even try to kill each other. But since Mr. Ford is not as strong as Indiana Jones anymore, I don't think I need to bring him to school and ask him to tell before these High School students his experience becoming a historical hero. He has already "observed" Indonesia himself.

Rather, he might come to visit this blog and gets tickled here. No, Mr. Ford I'm not going to write something silly about you to tickle everybody's funny bone. But I don't think tonight I'm going to visit YouTube to enjoy the nostalgic atmosphere by watching you being a hero there. 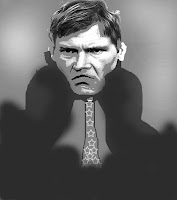 "Being happy is something you have to learn. I often surprise myself by saying  "Wow, this is it. I guess I'm happy. I got a home I love. A career that I love. I'm even feeling more and more at peace with myself." Have you heard of this quote of his?

If there's something else to happiness, let me know. I'm ambitious for that, too"

Yes, Mr, Ford, I'm learning to be happy too. But, Watch out! Here they come with swords!