Must You Stop Being A Sissy?

How to stop being sissy and lead a normal life? This question sounds annoying to those who happen to be so and enjoy as what they are now, does it? But, as a saying puts it; when there's a will there's a way, there's nothing impossible in life, no matter how hard or how long it takes to lead a decent life. Aren't we familiar with such words like sooner or later, or gradually and so on? 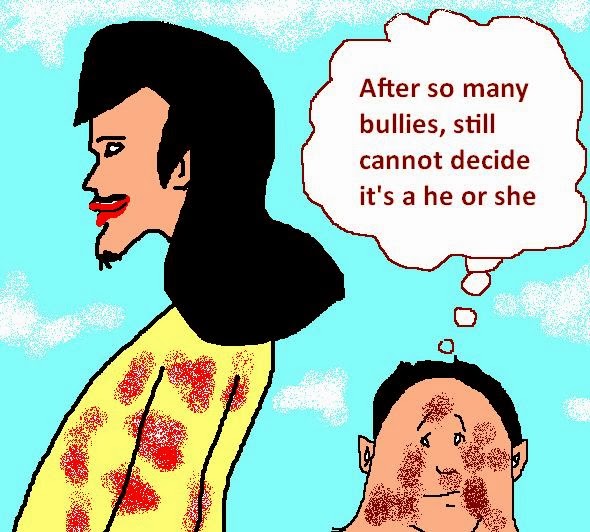 What is sissy? You may refer it to a boy who other boys dislike and laugh at because they think he is weak or interested in activities girls usually like, or a person who is weak and cowardly (Not brave). How to stop acting or having qualities which are traditionally considered to be suitable for a woman while you are a boy, has initially upset any parents whose boy acts this way.

You'll see the boy growing up thinking he is half man half woman cannot resist the temptation to be "unusual". The barbie doll you gave when he was a toddler, might make him believe that he should stick to it until adult. The idea of becoming cross-dresser again and again occurred to him and gradually he transformed himself into completely feminine. And now whether people call it sissy or transvestite, still the question: has the boy ever thought about how to stop being such a weird creature?

Once I saw a TV show in my country Indonesia how a hypnotherapy could change sissy behavior into masculinity. The target: two feminine actor assistants being hypnotized making them macho, absolutely far away from being effeminate. The famous interactive entertaining program called YKS (Yuk Keep Smile) successfully persuaded Olga Syahputra, a famous sissy comedian to be hypnotized to be a tough man to many disbelief.

So, referring to the question how to stop being sissy, you guys should believe you can do it. But only on one condition: you want to change or not.

Sounds it is easier said than done? Yes, I think so.

I would recall the day when I became addicted to smoking. My two brothers did too, and our father who was a heavy smoker absolutely did not like seeing us taking after him. It's not a sissy story, but you can take a lesson from how we male members of the family successfully quit smoking. Father of cardiac problem, me typhoid, youngest brother took to workout and my 2nd brother of lung disease.

Basically, how to stop being sissy is similar to how to quit smoking. If you think it's different, take a look at the reason of why my family and I succeeded it: Suffering! Some spiritual shock might work well for some people, unless you think that quit smoking, instead, makes you a sissy yourself.

Not so many people can do it or even want to think about it. Not so many people need to concern or beware of this. The barrier is in you. You yourself who can lift it to clear your way. Tragically, how to stop being sissy, you must create a condition that makes you think if you keep going on with this, you will die.The fancies you should create include the incurable HIV AIDS, terrible STDs, hell fire, hereafter torture--no jokes like spoiled eggs splashed from the heavens at all.

Whew! Sounds too much? Hm, let me put this way ... In order to be able to get rid of your ingrained personality problem, from now on you should keep repeating the word stop in your life. For example:


For short, stop doing all things you like in life. Can you? Say, yes and yes and yes. This is difficult, off course, similar to when you're doing a diet. But keep moving on, do point by point there gradually and keep optimistic. If you succeed, apply it to other likes of yours. Slowly but sure, change the word should here into must. Change your whisper suggestion over and over again, from should I stop being a sissy to must I stop being a sissy. If you still like wearing your beloved pink Hello-Kitty T-shirt, it's okay, you just cannot change your personality drastically, that's tolerable. Then take your precious time, concentrate, sit down on the floor, relax, breath in, breath out, gather all your power, close your eyes and then open your eyes. Feel it, feel that, all of a sudden, your eyes turn red as an irritated bull, your T-shirt turns to be an armor, now stand up, walk to the mirror; you see now you become Robocop. Go to get your comb or makeup tool, use your superhero power, convert them to a weapon. Now jump to bed, destroy all things three belonging to your enemies--the pillows!

What do you think? This is silly? childish? brutal? What more? Not to tickle your fancy, you can change everything in you in fun way. The key is only if you believe.

Keep saying, "yes I must", to the question must you stop being a sissy?! Do the same for the next fun, and change your role as Robocop there with angered Terminator or Transformer and the like.

After all, relax and take it easy. If you get back to the mirror and find the fact that you're still sissy, no cry, there's a power remaining there to challenge you to become more unusual than now, and it wants you to do it again and again. God knows you do your best!

Email ThisBlogThis!Share to TwitterShare to FacebookShare to Pinterest
Labels: how to stop being sissy, sissy
Older Posts Home
Subscribe to: Posts (Atom)